Reasons For Loss Of Acceleration - Otobots 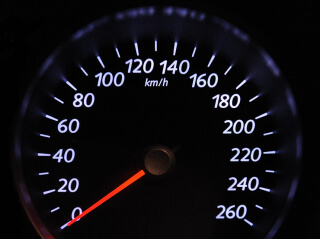 Issue With Fuel Filter
The fuel filter is placed between the fuel injectors and fuel pump. Its main function is to filter the fuel from any impurities and make sure clean fuel enters the engine. It prevents contaminants from entering the engine and harming it. If the fuel filter is worn out or malfunctioned, it could damage the engine and affect the mileage as well as reduce the acceleration of the car. A clogged fuel filter needs to be repaired or replaced immediately.

Issue With Exhaust
There are two filters in the exhaust that make sure to cut down the pollution generated from the gasses exhaled by the car which are muffler and the catalyst converter. The catalyst plays the major role in cutting down pollution while the muffler decreases the noise made by the car. If the exhaust pipe or the filters get clogged, it would affect the functioning of the engine and reduce the power being generated. There will be a loss of acceleration in the car.

Issue With Injectors
The fuel injector is a really important component of a car’s engine. It is located near of the fuel system and does the job of spraying fuel inside the engine. The engine’s computer is what controls the fuel injector and at regular time intervals, the injectors do the job of spraying fuel into the car’s engine. It helps the engine perform better and gives a better driving experience in any condition. If the fuel injector malfunctions or gets damaged due to some reason, the engine would suffer a lot and the power of the vehicle will get affected immensely. Not just the loss of acceleration but if fuel injector malfunctions, it can cause numerous problems to the car.

Issue With Fuel Pump
The fuel pump is what pumps the fuel to the engine. Its main responsibility is to transfer the fuel from the tank to the engine. It also ensures that the fuel is delivered at the right pressure to meet the demands of the car to deliver optimum performance. If the fuel pump gets damaged or malfunctions it would result in acceleration problems and cause severe performance issues. Plus, the fuel pump repair and replaced are really costly repairs that can cost a lot to be done.

To get this problem resolved, you can get the car diagnosed and repaired at an auto repair shop near you or buying calling a mobile mechanic near you that would come to your home or office to provide the service at your convenience.